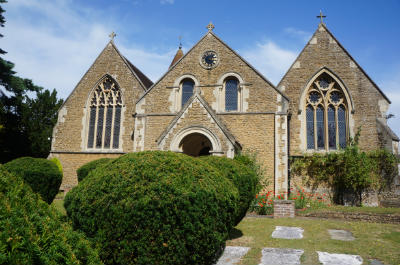 The Domesday Book (1086) refers to three churches in the Manor of Bramley. One of these was probably on this site but there is no visible evidence of it. The church as you now see it is the result of restoration and rebuilding during the Victorian age to meet the needs of an expanding population.

Bramley was originally a part of the ecclesiastical parish of Shalford, with a separate chapel since probably the 11th century, and it appears to be one of the three churches in Bramley Manor in 1086. It was a distinct civil parish from Shalford before it was ecclesiastically separated in 1844.

In 1850, the north aisle (to the left of the nave) was added, providing free seating for the poor of the parish and the nave was rebuilt. in 1875, the south aisle was added and the porch was extended. The church is essentially the same today.

The church has a ring of six bells, rung on Sunday mornings and at other times. (For more information about our bells, visit the Holy Trinity Bells page.)

In the north aisle you will see the medieval font that came here in 1977 from the redundant church in Norwich. The aumbry (cupboard) contains Holy Oils used for Baptism, Confirmation and in ministering to the sick. 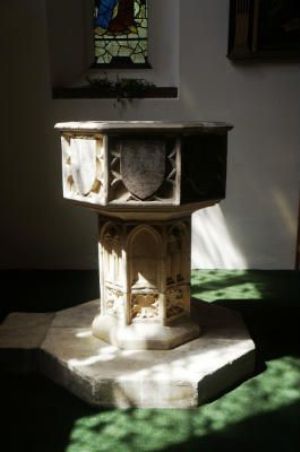 On the wall close to it is a fine reproduction of Fra Filippo Lippi's painting, The Annunciation, the original of which (c 1448) can be seen in the National Gallery, it shows Mary silently responding to God to become the mother of His Son. The hand in the apex of the picture represents God. Notice the dove, a symbol of the Holy Sprit, hovering dose to Mary's womb. 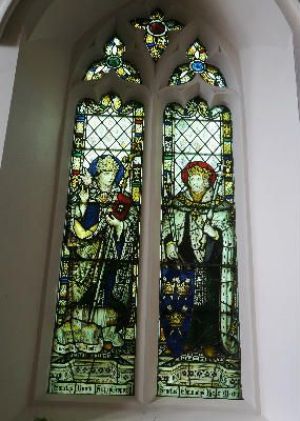 The window on the right depicts two bishops, the left hand one is St Boniface, an 8th century missionary to what is now Germany. 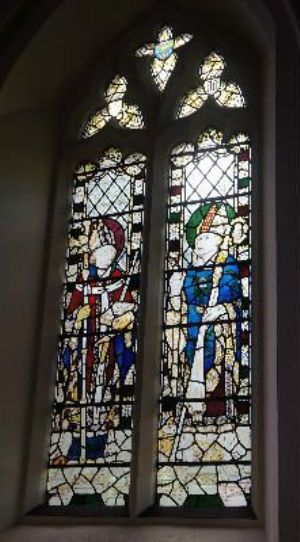 The Children's Chapel was completed in 2006. The olive tree on the screen represents the Church with its Jewish roots. Symbols on the roots begin with creation and represent some of the important people and events in the Old Testament leading up the coming of Christ. 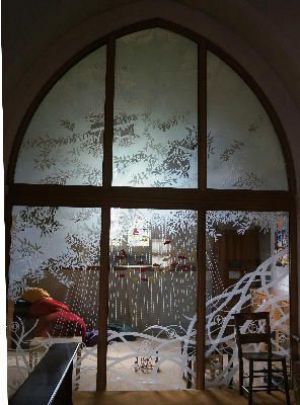 The church was re-ordered in 1962 to reflect the contemporary, but also early, understanding of the Eucharist as a corporate activity. A nave altar on a platform in front of the chance! screen was introduced. The organ was moved to the west end of the nave and the choir moved to the east end of the south aisle.

The icon on the wall to the left of the chance! arch shows the risen Christ breaking bread with Cleopas and his companion at Emmaus, one of the resurrection appearances recorded in St Luke's Gospel.

The chancel, with the tower, is the oldest part of the church, dating from the 13th Century. The high altar and reredos above it date from 1911. On the reredos to the right of the crucifixion are the figures of Mary and St Paui and to the left, St John and St Peter. St Peter and St Paul are the patrons of the Winchester Diocese, of which the Diocese of Guildford was part until 1927.

In the right-hand window on the north side the name Austen, a local famiiy and landowners. They were patrons of the parish, appointing the parish priest, until 1660 when this right reverted to the Crown who through the Lord Chancellor continues to appoint the incumbent. Close to this a white light burns indicating that the Blessed Sacrament, the consecrated bread of the Eucharist, is reserved here.

The left window on the south wall of the south aisle represents St. Richard, a Bishop of Chichester in the 13th century. Close to this is the large grey memorial to Henry Ludlow, who died in 1730.

The three pairs of windows to the right had been taken out but were restored and replaced in 2000 as a Millennium project. The left part of the first window depicts the presentation of Jesus in the Temple when he was forty days old. Simeon and Anna can be seen and the doves in a cage, the offering of a poor family. The right part shows the Flight into Egypt.

One side of the middle window shows the Holy Family going to Jerusalem and in the other the young Jesus is in the Temple. The right-hand window shows the Baptism of Jesus in the River Jordan by John the Baptist, a significant moment in his life, following which he began his public ministry. The other half shows the wedding at Cana when Jesus turned water into wine.

To read more about the history of the parish of Bramley, visit https://www.british-history.ac.uk/vch/surrey/vol3/pp80-86#h2-0001