Priest-in-Charge of the Parish of Holy Trinity, Bramley  (Diocese of Guildford) 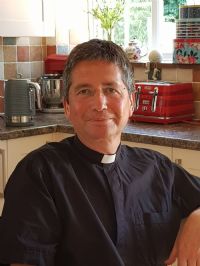 Andy has been Priest-in-Charge of Holy Trinity Bramley since 23 April 2020, but due to the Covid-19 pandemic, was only able to move into the parish in July 2020. He has served over thirty years in ordained ministry: all of them as a parish priest, except for three years as Bishop’s Chaplain, and he has a wide range of pastoral experience.

He has been married to Christine (Chris) since 1996. They have a black and white rescue cat called Lou-Lou (“;Lou” for short). Chris has a number of significant health challenges that she prefers to keep private, but despite them she provides a rich and secure domestic life (thereby freeing up Andy for his ministry) rather than having a more direct involvement in parish life.

Andy was born in 1963 and raised in the village of Shedfield in the Meon Valley in Hampshire (so he is a “country boy” by background.) His mother died after a long struggle with Alzheimer’s Disease in 1998. His father, who is well into his nineties, still lives in the house where Andy was born and raised. Andy’s brother, who retired in 2018 from a career in Human Resources lives in Norfolk with his wife and two daughters.

Andy has a B.Sc., (2:1) in Psychology from Bath University and a B.D., Bachelor of Divinity (1st) from Edinburgh, where he went to Theological College.

Andy relaxes with a glass of gin or red wine and by walking or taking a bike ride. He likes to read widely (mostly non-fiction) and enjoys trashy films. He is a regular Platelet and Plasma Donor.